Honey bee guru Eric Mussen is serving his sixth term as WAS president. He is one of the three co-founders of WAS. The conference t-shirt is the work of UC Davis artist Steve Dana. (Photo by Kathy Keatley Garvey)
Turning 40 can be mind-boggling.

But it will be bee-boggling--all bee-boggling--when the Western Apicultural Society (WAS) meets Sept. 5-8 at the University of California, Davis for its 40th annual conference.

Professor Norm Gary, now professor emeritus of the UC Davis Department of Entomology and Nematology, spearheaded the founding of WAS and served as its first president. Mussen joined him as the founding vice president and Becky Westerdahl as secretary-treasurer. Westerdahl, then a postdoctoral scholar, is now an Extension nematologist. Both Gary and Mussen will be speaking at the conference.

Mussen, who retired from UC Davis in 2014 but maintains an office at Briggs Hall, said most events will take place in the UC Davis Activities and Recreation Center (ARC) and surrounding facilities associated with the UC Davis Department of Entomology and Nematology.  Off-site tours are also planned during the afternoons. A honey bee cleaning a cell. (Photo by Kathy Keatley Garvey)
There's still time to register, Mussen said. The WAS conference is open to all interested persons; registration is underway at http://www.westernapiculturalsociety.org/2017-conference-registration/

Just a few of the topics and speakers:

Of special interest are the subgroup tours on Thursday, Sept. 7 that cycle through the Laidlaw facility, aka "Bee Biology Faciilty," and the nearby bee garden:

Among the other topics: The "Next Generation Beekeepers”  session in the Sensory Building, Robert Mondavi Institute, 392 Old Davis Road. This event will include beer, music, networking and an interactive group session.

UC Davis artist Steve Dana created the conference T-shirt featuring a bee on a high wheeler bicycle or penny-farthing, symbolizing UC Davis. The t-shirt can be ordered on the WAS website athttp://www.westernapiculturalsociety.org. The conference registration form, speaker program and other information are online.

WAS, a non-profit organization, represents mainly small-scale beekeepers in the western portion of North America, from Alaska and the Yukon to California and Arizona.  Beekeepers across North America will gather to hear the latest in science and technology pertaining to their industry and how to keep their bees healthy.

(Editor's Note: Initially on the schedule was Serge Labesque of Glen Ellen, who will be unable to participate. Gene Brandi of Los Banos will be speaking instead.) 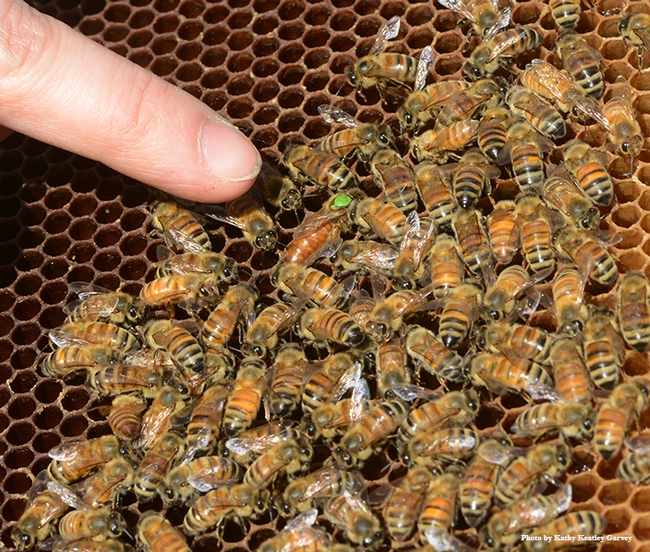 Pointing out the queen bee. (Photo by Kathy Keatley Garvey) 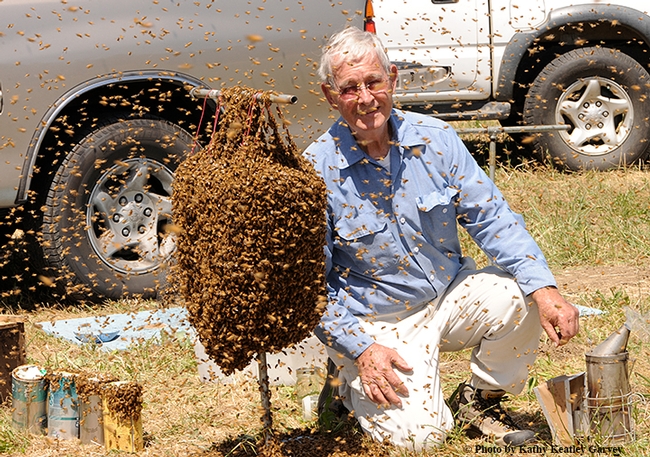