Bee-hold: The Eye of a Honey Bee

Bee-hold, the eye of a honey bee!

Have you ever looked into the eye of a honey bee? Really looked?

If you read Norm Gary's popular book, Honey Bee Hobbyist: The Care and Keeping of Bees, you'll see just how marvelous they are.

Norm Gary, emeritus professor of entomology at UC Davis, and a widely known bee wrangler for Hollywood movies and documentaries (as well as a musician), covers many topics in his book, published in 2010 by Bow-Tie Press.

"Bees have two compound eyes, each composed of thousands of light-sensitive 'micro-eyes' (ommatidae) that are fused together," he writes. "Each ommatidium has a lens and a nerve connection. The ommatidia are connected to collectively generate a mosaic of sensory inputs into the bee's tiny  brain, where the signals are  integrated into a functional image. Yes, bees can see images--especially flower shapes--as well as colors.  They see shorter wavelengths better than humans;ultraviolet is invisible to humans, but bees see it as color. Flowers are exquisitely endowed with nature's ultraviolet artwork, which we visually impaired humans can't enjoy."

Note that "there are three additional simple eyes (ocelli) on top of a bee's head," Gary points out.

We've always been fascinated by the microscopic hairs all over the bee body, from the abdomen to the thorax to the head.  The branched hairs on the eyes are clearly visible in this photo, taken with a Canon MPE-65mm lens.

This little bee was foraging in our Spanish lavender, and stopped to "eye" me. 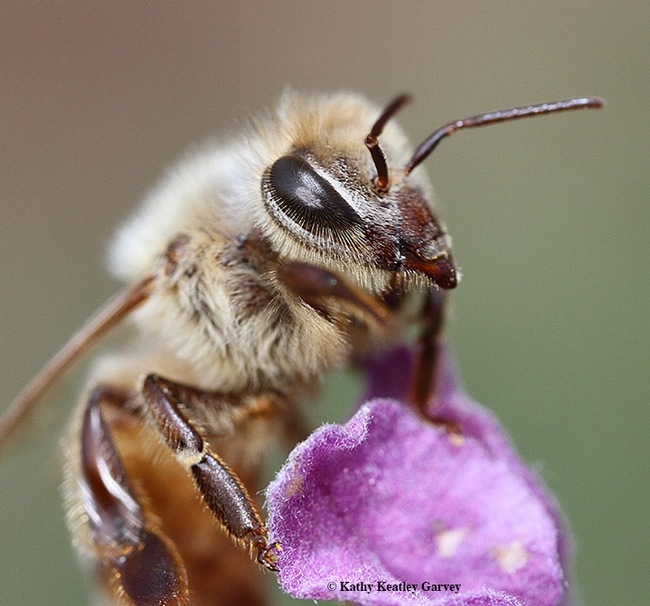 Close-up of the eye of a honey bee. (Photo by Kathy Keatley Garvey)